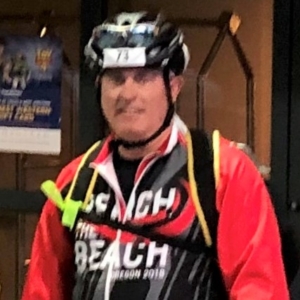 Getting to know Grant Murrell

Pete: When did you begin biking and why?

Grant: I started biking when I was six because kids did that then (a little humor). I was a runner until 2008 when I shattered my ankle and had to give up running. I was a casual bike rider ‘til then but cycling became my main method of outdoor exercise along with hiking.  Three surgeries and an eventual ankle replacement limited my motion in the ankle; however, riding wasn’t affected. So began my riding career. I joined Cascade Bicycle Club in Seattle to get in on STP and RSVP. I have a friend whom I have known since grade school who lives in Seattle, so we started doing the events together.  I joined the Pacific County Washington Fire Department in 2005 and became a volunteer fire equipment operator and an EMR (we had a second home on the Long Beach peninsula). I volunteered to be a bike medic for STP and RSVP which I do every year along with The Flying Wheels century. I joined PBC several years ago in order to support riding here in Portland, but I must admit I don’t attend many meetings. I have volunteered to drive a bike truck to Seattle for STP.

Pete: How many miles do you typically ride in a year? Club rides, or independent rides?

Grant: I typically ride 5000 to 6000 miles a year but during the pandemic I have been riding more.  ✎  I ride inside during the winter and this year I have increased my mileage to 750+ miles a month. When I ride outside, I ride alone as my friends here in town aren’t into riding more than ten miles at a time. I rode the Pioneer Century once, but other scheduled rides have conflicted with doing it again.

Pete: You must have a favorite bike in your “stable.” What bike is it, and how many others do you have?

Grant: I have two bikes: my Trek 2.1 hybrid was my first bike after my first ankle surgery; my second bike is a Stradelli CF which I had built for me in 2014. I ride my Trek on a stationary trainer in the winter and then both bikes outside in good weather.

Pete: What do you find most enjoyable about biking? Is there anything about the activity that you don’t like?

Grant: I guess the most enjoyable thing about riding is going to other states and cities and seeing them at a slow pace and enjoying what they have to offer. I have yet to find anything I don’t enjoy about riding.

Pete: In addition to cycling, are there other hobbies, interests, or pursuits you engage in?

Grant: I do enjoy walking (my wife and I walked across Spain on the Camino de Santiago in 2015). When permitted, we travel with friends from Pennsylvania to other countries on Rick Steves’ tours which require a lot of walking. We take our grandkids on a national park road trip every summer, and we do other miscellaneous trips when the urge strikes us.

Pete: While we would all like to be biking fulltime, unfortunately, we have to work to support this and other habits. What kind of work do you currently do in your “day job?”

Pete: What is a surprising fact about you that your fellow club members might find interesting?

Grant: I don’t know that there are any surprising facts about me. I guess I’m just your average retiree trying to stay healthy and live a long life.