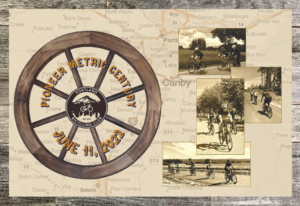 A huge thank you to all the riders who came out to ride and support the Pioneer Metric Century on June 11. The forecast was grim, and many who pre-registered did not end up participating, but those who did had a wonderful time, despite one rain shower and a bit of flooding on Canby roads. Thank you to our tireless volunteers for giving their time so that others could enjoy the ride.

ABOUT THE PIONEER METRIC CENTURY

The Pioneer Metric Century is named to reflect the history of the Champoeg, Canby, and Molalla areas. Rich farmland and timber brought the pioneers to this area and this same beauty draws cyclists today. The Pioneer metric Century offers great routes whether you seek a social ride or personal best.

Here are the PDF maps for the two routes.

There are two versions of the Metric Century – one has a challenging hill. Here are all three routes on RideWithGPS:

A testimonial from one of our previous Pioneer riders:

“I finished the Sawtell metric century yesterday. I went for it, after all that complaining and procrastinating. Naw. Just wanted to tell you I did it, thanks for the support and communication about it all. I’m proud, tired, and sore, and looking forward to my next ride. PS: I sure was impressed with the organization of the ride and the great route markings. Take care. Maybe see you down the road.”