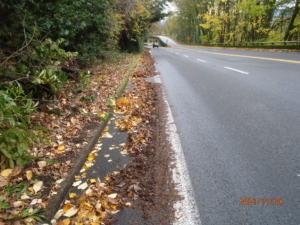 On November 15, I sent the following email to Roger Geller at the Portland Bureau of Transportation (PBOT). He is the department’s Bicycle Coordinator and has been quite responsive to my observations and questions (i.e., complaints) in the past. He is the one who finally got the blackberries on Marine Drive cut last year, and it is scheduled for this year too. When I ride from Beaverton to any place in Portland (and I do that a lot), I almost always take Beaverton-Hillsdale to Barbur and then cross the river at one of the bridges. So, I am aware of these problems.  ✎ 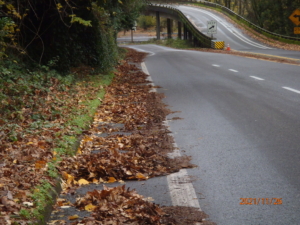 I am sure that other club members are aware of other problems as well, so please feel free to contact me with details (and photos if possible!). I can pass them on to PBOT. 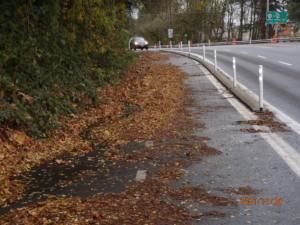 The “traffic separators” I mention in the letter below are concrete strips about four inches high, six or eight inches wide, and about ten feet long placed along the stripe that separates the bike lanes from the car lanes. At the end of about every other traffic separator, PBOT has put in what they call “delineator posts,” which are plastic tubes about three feet high with reflective tape on them. The purpose of all of this is to promote the safety of bike riders (and the dreaded scooter users!). I believe, as I point out in the letter below, that they are not problem free.

I know you are busy with keeping the bike lanes clear this time of year, but I have a couple of special concerns. 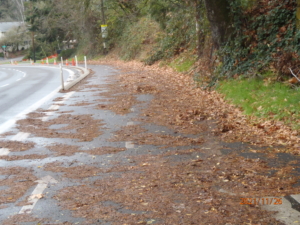 Hey, I know you are busy, and I have seen the progress with the traffic separators, so I mention these recurrent problems in the spirit of “squeaky wheel” hoping to get some grease. 😊

The presence of the traffic separators and the trapped debris (as well as the trapped riders!) poses a serious falling hazard.

Comments, anyone?? My email address is [email protected].