Member Memories: STP in a Day

My second perfect STP-in-a-day experience – this time as a volunteer! My dad got into road cycling shortly after he moved to Oregon, joined the Umpqua Velo Club and was very proud to complete the STP with a friend a couple of times when they were in their 70s. A little later (around the turn of this century), I completed the one-day version and had such a great time, such a perfect day, that…sure it couldn’t ever be better…I swore never to do it again. Until today…

It wasn’t quite as sunny or as warm a day as it had been years earlier, but it may have been even better weather for cycling 200+ miles. Wearing my club jersey and threading through the traffic and stop lights of Portland I again felt that nervous excitement of nearing the finish line coupled with anxiety fearing I might be later than the time I had promised others I’d be there. But the anxiety left me when I spotted the finish line, glanced at my watch, and saw I was ahead of schedule!  ✎

My legs felt as fresh as they had all week as I got out of my truck to check in at the volunteer tent, collect my T-shirt, nametag and – surprise, surprise, a food voucher and bottle of water! A few minutes later, I met Kathleen (my shift boss), got my instructions, turned on the bubble machine, and grabbed my microphone.

It was a good thing I was early for the 3:00 shift, or I wouldn’t have gotten to shout over Kathleen to welcome in the first one-day rider at 2:53 PM! Someone came up and told us the finisher was Forest Hietpas from Sequim, Washington, who had averaged 21.7 MPH. The next rider arrived at 3:30 and the third cyclist hit the chute 20 minutes later. Then things got moving with the fourth rider in at 4:01, fifth seven minutes later, and the first group (finishers 6, 7 and 8 – including the first female rider) shot into the finish chute at 4:11. 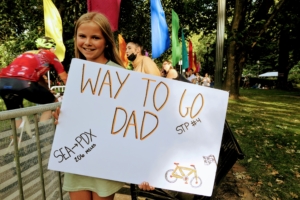 Over the next 50 minutes, the sponsors had been announced and thanked many times, lots of cowbells had been rung, and I’d stolen the louder mic when Kathleen left for a second. The massage therapy tent had gotten busy. Scents of gyros, Mexican food, pizza, dogs, garlic fries, and more filled the air. Traffic control had kept pedestrians from walking into spent cyclists with eyes only for the finish chute. The bubble machine had been refilled, and 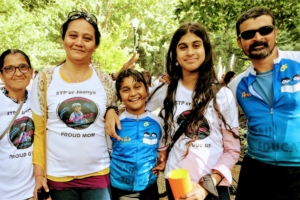 the source was fixed. The sun was shining. Finishers and others were relaxing and enjoying the offerings of the beer garden. The park was filling; bystanders, friends, and families were lining the finish area rails, and some 50 cyclists either solo or in small groups had finished the 206-mile journey.

Over the next hour the energy and good vibes in the park continued to expand as scores more riders (including “Grandpa” who was welcomed with cheers from family and handmade signs held high by his granddaughters) road into the chute to high fives, ringing cowbells, and applause. Suddenly my replacement Monica appeared, shook my hand, then wrestled the microphone out of my hands, and I was shooed off the stage. PBC volunteer shift 2 was effortlessly taking over. Craig was replaced by John and so it went, all while the one-day riders waited for traffic lights to turn green before crossing the finish line. Before leaving, amidst the growing number of finishers, I spotted and congratulated George Ammerman, who was the first PBC member finisher I recognized.

As I left in the satisfied glow of my second perfect STP, I couldn’t help but think about STP 2023: ride…or volunteer? Either way, the third time won’t be a charm – more likely “Perfection III”!