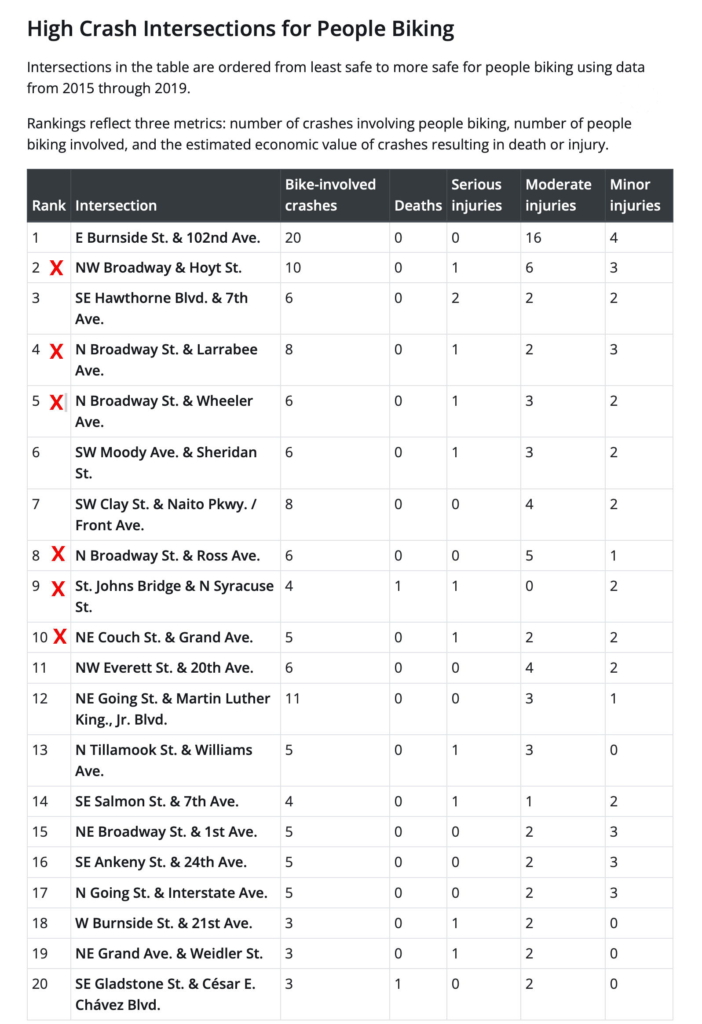 Six of the intersections, all within the top ten locations, have something in common that is of interest to cyclists: they all occurred at or near approaches to or departures from bridges.  ✎  Cast your attention to the items on the chart marked with a red X.

Number 2 is at the end of the southbound ramp off the Broadway Bridge. It’s a steep decline ending at NW Hoyt. Numbers 4, 5 and 8 are on a steep decline toward the westbound entrance to the Broadway Bridge. Number 9 is a 90° turn off the exit ramp of the St. Johns Bridge into the St. Johns neighborhood and where cyclists commonly attempt to enter the bridge from N Willamette Blvd to cross the bridge in the opposite direction. Number 10, at NE Couch and Grand Avenue, is the westbound approach to the Burnside Bridge.

Numbers 2, 4, 5, and 8 are all steep declines where bikes are liable to be proceeding at a fast rate of speed. Another factor may be at play with regard to number 4 (approach to the Broadway Bridge) where cyclists in the bike lane against the curb must jump a lane of traffic to continue in the bike lane.

Regarding number 10, factors other than it being an approach to the Burnside Bridge may be involved. Like the others, there may be a speed factor, being at the bottom of a descent, but additional variables may include a high concentration of vehicles, right-turning traffic crossing the bike lane, and right-turning cyclists turning north directly into the hazard of the streetcar tracks.

What does the analysis tell us? Extra caution and vigilance are required in the area of bridge approaches and departures.