Don’t miss the best night of the year… the Portland Bicycling Club’s Awards Banquet on Sunday, January 26, 2020 at the Monarch Hotel near Clackamas Town Center.

Or, download, print, and complete THIS FORM and mail it to Benn Schonman with your check.

The awards committee, comprised of past winners of the Jim Mooney Member of the Year Award, selects winners from the written submissions received. Send nominations to Arden Shelton at [email protected] by midnight on December 31, 2019 (but we’d rather have them much, much earlier!).

This is not your typical boring awards banquet. This one is long on fun and very short on speeches. This is an evening to celebrate our outstanding club members who have provided service to the club above and beyond the norm and whose eff­orts have contributed greatly to our riding enjoyment. It is also a chance to go home with some really great door prizes!

The banquet is a casual a­ffair. Dress up fancy or wear your most comfortable jeans. Come and see if you recognize your best riding friends in street clothes! This is an event for all members. Come by yourself, bring a guest …or bring a group! Enjoy two of our favorite things: bicycling and eating. The Monarch puts together an exceptional banqu­et. The no host bar opens at 4:30 p.m. and dinner starts at 5:30 p.m. with the festivities to follow.

And HERE is a link to the program for the last year’s event. 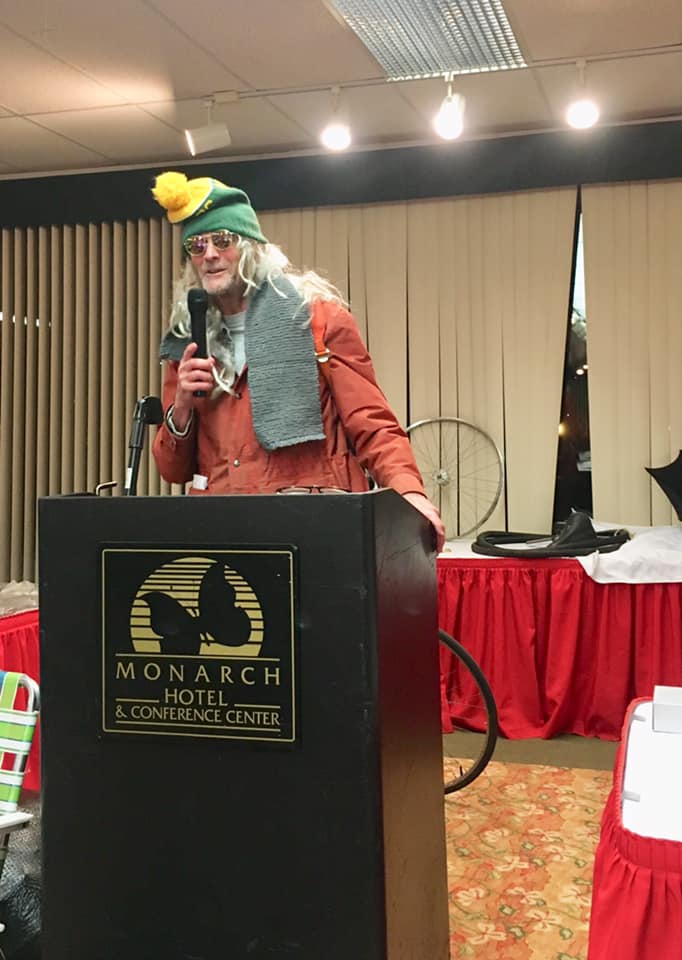 It’s time to be thinking about nominating your deserving fellow riders for some special awards. Now is the time to be looking around at your fellow riders who might deserve special recognition, not December 31 (the deadline).

Valued Member Award (two may be given): 1) To be eligible a member must have contributed to Portland Bicycling Club in an outstanding manner during the year for which the award is presented, but member may not meet the qualifications for Member of the Year Award.

Volunteer of the Year (one given) Member in good standing who has contributed in any of the following capacities: event coordinator; working volunteer for any event (but not necessarily coordinator); active Ride Leader; held either board or committee positions; or participated actively in club activities. Nominee’s recognition can be for one outstanding contribution or as an ongoing participant. Award is not restricted by length of membership.

Ride Leader of the Year (one given): Recognition of member who has exceeded in adhering to the guidelines set forth in the Ride Leader Check List. Has conducted themselves in a conscientious and friendly manner, showing knowledge of the route, presents themselves as an ambassador for Portland Bicycling Club by welcoming non or new members at rides.

Newt Acker Good Will Ambassador Award Member in good standing whom within the past year has helped to enhance the friendly image of Portland Bicycling Club within the community.

Come Back Award Member who has suffered injury while cycling, yet came back with style and determination to resume cycling within that year.

Most improved Rider (multiples given) 1) Be a Portland Bicycling Club member in good standing for 2 years or more. 2) Must have ridden 500 Club miles or more for the year for which the award is presented. 3) Has shown improvement in different types of distances and terrain within their riding capabilities.

Most Improved New Rider (multiples given) 1) Joined Portland Bicycling Club in year of award or previous year, but no later than October and rode under 500 miles the previous year. 2) Must have ridden 500 Club miles or more for the year for which the award is presented. 3) Has shown improvement in different types of distances and terrain within their riding capabilities.

Click HERE to see past recipients of the awards.