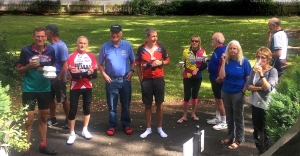 Thanks to all those who attended the event on September 14 at the Cornelius Pass Roadhouse. This event was made possible through a donation from Ron Householder, a long-time and dedicated club member, who passed away in early 2013. I have enjoyed learning about Ron from others (tidbits “here and there”) prior to and during the actual event. Many of you may not have known Ron, but from the stories gathered, he was a generous and quirky individual who many had the privilege of knowing and riding with. Here are a few facts about Ron:

To share how the historic Cornelius Pass Roadhouse was chosen as our venue, Ron’s objective with his generous $3,500 donation was to give the club an event that our members could enjoy. The venue was chosen based on location ( a site where what most would consider a ‘doable’ ride could easily be started), and food/beverage prices that fit into our budget, as well as quality. The pricing was evaluated based on the cap of 100 attendees (we have to cap it at some point to budget). This cap was chosen since past picnic numbers show that sometimes we reach around 100 guests (e.g., 2017 and 2018), and with a desire to make this event available to most, if not all, members. We could have chosen a different venue (e.g., Portland), but did not want this to increase the number of attendees we’d have to limit, as costs would have been higher for the same quality. In the end, we stayed well within budget, leaving over $800 to go toward future endeavors for members.

To sum up, we lucked out as the sunny weather allowed for great riding conditions. The rides were followed by a catered lunch, with plenty of time to socialize, and a brief sharing session. Approximately, 65 people attended, and most rode – either the 30-mile Helvetia Hill ride (facilitated by Scott Poindexter) or the flatter, 24-mile course out to North Plains (facilitated by me). Thanks for your patience from those on the 24-miler. It is interesting planning for cul-de-sacs (in memory of Ron) on a ride with 35+ riders at different paces! There were two cul-de-sacs on this ride (on the cue sheet), but we got a bit turned around trying to find the second one, and laughs were had.

Lastly, thanks to Alan Coppola, Ann Morrow, and Peter and Elaine Schmidt for helping as “course marshals”; Scott Poindexter for helping map both courses; and to Cindy Bernert-Coppola for running registration. Most importantly, thank you to Ron Householder who made this event possible.