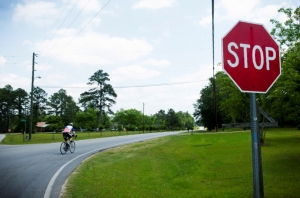 The Idaho stop comes to Oregon or how to non-stop safely at stop signs. You’ve been preparing for this moment your whole life. Well, maybe just your cycling life. Whatever, it’s been a long time. Years of practice, technique adjustments, study of other cyclists’ methods. All the ways to successfully run a stop sign without being detected – without getting ticketed – by a cop. You’ve even learned how to intimidate a cross street driver with the right of way as you approach an intersection, a stop sign staring at you. You may even have gone so far as to travel to Idaho, that bastion of progressive cycling laws where you could legally practice running stop signs on your bike since 1982. The moment occurred in Oregon (please remember that Vancouver is not in Oregon) on January 1, 2020.

Now fellow cyclist, you can do what you’ve been doing all along anyway: treat that stop sign (or flashing red light) as a yield sign. Here’s Oregon’s version of the Idaho Stop law:

SECTION 2. (1) A person operating a bicycle who is approaching an intersection where

traffic is controlled by a stop sign may, without violating ORS 811.265, do any of the following

without stopping if the person slows the bicycle to a safe speed:

(a) Proceed through the intersection.

(b) Make a right or left turn into a two-way street.

in subsection (1) of this section:

so close as to constitute an immediate hazard;

(b) Disobeys the directions of a police officer or flagger, as defined in ORS 811.230;

(c) Fails to exercise care to avoid an accident; or

(3) The offense described in this section, improper entry into an intersection where

traffic is controlled by a stop sign, is a Class D traffic violation.

What is this new law really going to change? Well, you won’t risk getting a ticket. Will your erroneous assumptions and lack of knowledge about the new law trick you into taking more risks at intersections? NO! That is what I’m here to tell you. If anything, you should now be more careful. You have a stop sign, the cross street doesn’t. The law requires you to slow down and assess the hazards posed by cross traffic or approaching cross traffic. And you still can’t forget about pedestrians and flaggers. But, the most important language of the statute requires you to AVOID AN ACCIDENT.

The November 12, 2019, episode of Cycology Today featured two Portland lawyers who specialize in bike accident cases. They discuss the new law (minutes 14:00 to 21:20) and highlight other new developments in traveling our city by bike. I highly recommend the entire show as it contains many other things you need to know for your cycling safety. See it all here: What Your Lawyers Want You to Know.