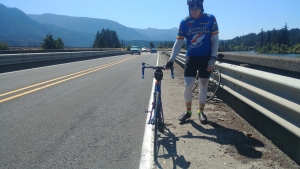 Once upon a time in the not-too-far-away gorge town of Stevenson, Washington, I was riding home from a weekend of camping near Klickitat with club friend Andreas when I thought I would move over from the traffic lane of the SR14 bridge and onto the shoulder to avoid car traffic. Just after a split second of crossing the white shoulder line, I found myself helplessly falling over, landing on a one-inch high sidewalk. At high noon, the curb was from my perspective nearly invisible. No shadows were cast. No reflectors were on the curb. No white plastic poles were there demarcating the sidewalk and asphalt. To me it looked like a level surface, but I was wrong. I ended up with a banged-up knee, road rash, a flat tire, a wobbly wheel, and most damaging, a bent rear derailleur hanger. My speed during the spill, 13 mph, all I could do while bucking a fierce headwind! In hindsight, here is what I learned:

There are many other culprits, such as potholes, steel construction plates, manhole covers, water main valve covers (that might even be covered with a layer of gravel or leaves), storm grates, pavement seams, cracks that run parallel to your bike, and finally, railroad tracks, which continue to bring us riders down! As for curbs or the edge of any road or path, be sure to give yourself ample space. I read a Bicycling Magazine™ article that recommended a two-foot margin. Many of us violate that margin on the bike path near Jantzen Beach in order to avoid a bumpy crossing seam, but in doing so one of our esteemed riders of our club went off the bike path; and the path itself became the hazard resulting in a painful spill, much like my curb encounter!

Just one more example, thanks again to personal experience. I found myself crashing to the pavement on a Danville, California, road during my early years of cycling. The problem? An unseen and unexpected lump of asphalt on the shoulder of a main road, protruding only an inch or two above the road surface. I could hazard a guess that maybe a tractor trailer unhitched there, and the steel jack stand under load caused the asphalt to deform in the heat. More importantly, why did I fall? First, I didn’t see the hazard, as the lump and the pavement were the same color. Second, my hands were on the horizontal section of the handlebars with my thumbs over the bar instead of under. With my thumbs locked underneath, they would have allowed me to grip the bars, but when I hit that bump, both hands went sliding forward, causing me to lose control of the front wheel, and you can imagine the rest of the story. (I won’t tell you about looking around to see if anyone saw me…)

You may wonder how my non-club gorge ride ended, as I was unable to continue with my derailleur jammed into the spokes of my rear wheel, so I called my lovely wife, Karen, and she came out to the rescue with our pickup truck even before Andreas and I could finish our hamburgers from the local café. For dessert I had humble pie!