The View from Here: How do YOU identify? 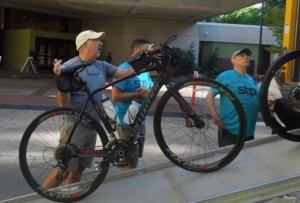 Portland Bicycling Club’s 2019 has been active in a positive way, some would say, and tumultuous, others might say. Not having a signature event ride, most recently known as the PIONEER CENTURY, elicited many emotions from our members. Our name change seemed to do the same for some.

However, it’s September, and we are moving forward, working toward building on the history of this group of avid cyclists that began its existence in 1971. Some club members are focusing on developing a new event ride for our club. What should that look like in 2020 (and beyond)? This small group is trying to figure out what kind of ride will be fun, profitable and manageable. This is positive action on behalf of our club and our new persona – inclusive, contemporary, viable.

In 2020 we anticipate the possibility of this new event making its debut. And, we expect to be running the Seattle to Portland finish line again for Cascade Bicycle Club. Maybe we will participate in a few Sunday Parkways (see Kathleen Hellem’s article). Perhaps we take on a larger role promoting bicycle safety in our community with a new element involving helmet placement (see my 2019 update on NWBSC).

The foundation for all the above, and other activities necessary for the ongoing survival of PBC, is VOLUNTEERS: those who join our club for the cycling but also give their time and energy to ensure the health and success of the organization itself.

We often lament that young people are not joining our club (a new, youthful, vigorous contingent to take on some of this volunteering). Where are those darned millennials (a person reaching young adulthood in the early 21st century)?

Who volunteers the most? According to Up with People, January 2018, Gen X, those born between 1965 and 1980, are at 28.9% followed by Baby Boomers (most of us PBC-ers) at 25.7%. Millennials were logged at 21.9% and volunteering more each year. Seemingly not a huge gap. Think of your own exodus into the world of cycling (and then volunteering for the club). As young people (let’s say in our 20s and 30s) we were finishing college, starting careers, raising families. In my mind, that whole family thing is a major impediment to club cycling. So many of us came to the club as our children grew older and were more independent. We find many members came to the club in middle age and are growing older with the club.

Should we be targeting millennials as our target market for new members? I think not. I think we should pursue people who share a passion for cycling as we do, regardless of their cultural designation as a Boomer, Gen X-er or Millennial . . . or whatever label you might affix – but let’s not waste time with ANY labels. Humans that like to bike! I think that is who our members and volunteers have been, are currently and will be in the future. Our welcome to Portland Bicycling Club applies to all and they will step up as volunteers as they are able. I’m optimistic and that’s why I volunteer.