Do Sunday Parkways Pay Off? 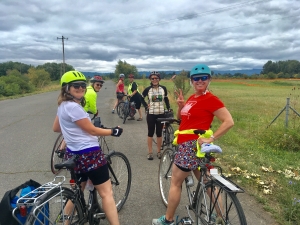 I’m so ecstatic to write this news article. As our club has recently made the name change, we’ve had the opportunity to present at three of the Sunday Parkways events this summer. We’ve always wondered if we ever get any new riders from spending the hot summer days at Sunday Parkways. Mostly, the intent has been to get club name exposure to branding needs. Along with that, a lot of talking to the public is involved. Our volunteers don’t just sit in the booth as the public rolls by. We are actively reaching out to the public and asking them if they are looking for bike rides. We have learned from our forefather, aka Bud Rice, to use some discernment when making the sales attack. For example, if they’re rolling by on a mountain bike with fat knobby tires and no helmet, perhaps we’d best save our breath.

I was on Ann Morrow’s Welcome Ride – Explore Vancouver (WA not BC) on August 18, in Vancouver, WA. The ride was 27 miles with about 1000 feet total elevation starting at McLoughlin Middle School. As I rolled up to the ride, I noticed a lot of new faces. I somewhat assumed they were from Vancouver Bicycle Club because Ann typically will list the rides she leads in Vancouver to VBC ride-share system. As such, we usually get VBC participation. Nothing unusual.

During the ride, I discovered that cyclists Roberta and Ruth had joined us from meeting our group at the Sunday Parkways event on July 21 at Kenton Park. Ann Morrow, John Burkhardt, Ashley Reynolds, and I volunteered at this event. It was the same gal I wrote about in last month’s QR – the one who screamed at me three years ago because of our old name, who hugged me at this year’s July 25 Parkways, and who said she will come ride with us. Well, I’m happy to report that not only did she come ride but brought her friend too. I’m confident she will be back to ride. Both she and her friend had a great ride with us.

The plot thickens! In addition to Roberta and Ruth, it turns out that Melissa and Carrie attended Ann’s ride as a direct result of Outer NE Sunday Parkways at John Luby Park – thanks to the efforts of volunteers Ana and Khaliyah! I’d like to mention that these two had a lot of great things to say about our volunteers. GREAT job, Ana and Khaliyah!

Great job everyone! This does put to rest speculation about Sunday Parkways and its relevance to increasing ridership amongst our club. We’ll be watching to see if they become members. You can rest easy knowing that I educated them all as to why it’s a great investment in their future. 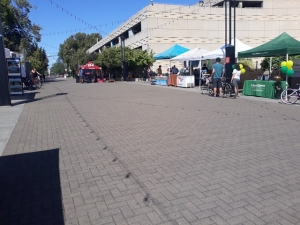 Addendum: Portland Bicycling Club attended the August 25 Sunday Parkways; Ann Sandvig, Jerry Lanz and Ann Morrow represented the club for the duration. We were fortunate to be placed at Moda Center and enjoyed a steady stream of cyclists stopping by to find out what we had to offer. As noted previously, many were interested, if not delighted, to learn that we had changed our name. Many were looking for rides for themselves or family members (you know, find an activity for the hubby to get him out of the house). We had a fun day. The only anomaly was some event near us involving Bill Walton and the BikeTown rentals. When that kicked off, sometime between 2 and 3 PM, everyone deserted the route and headed over to get a glimpse of the celebrity! The once busy route was suddenly bereft of any joyful Sunday Parkways participants, and we had time to chat among ourselves for several minutes.

These three Parkway events have been a good investment this year for the club.

Thank you to Kathleen Hellem for facilitating them for 2019.