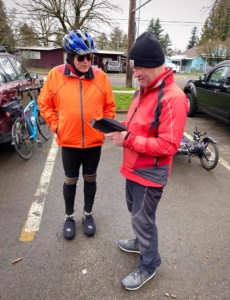 At the February 2021 Zoom club meeting the awards listed below were presented.

Here are some of the written nominations submitted on behalf of your award recipients.

Jim Mooney Member of the Year

I nominate Patricia McManus for 2020 Member of the Year.

Pat has steered the helm of the PWTC/PBC these past two years as an exemplary president. Her well written Top Talks were interesting and covered timely topics, especially in COVID year 2020.

She conducted board meetings in an unhurried fashion, giving both members and guests ample opportunities to speak their minds and participate in the business items at hand.

Pat, with the help of others, has kept the general membership meetings interesting and inviting for members and guests to continue to attend both in person and on live video feed.

Pat has piloted our club through many major and sometimes difficult and contentious topics these past two years.

Pat has kept the board and the membership well informed with her thoughtful communication of the many topics tackled in the busy year of 2019 and the uncertainty of 2020.

Pat represented our club by attending the LAB Bicycle Summit and heard about fellow clubs’ activities, problems, and programs in 2019.

Pat has volunteered on the Seattle to Portland finish line, and more than likely other events which escape my memory in 2019.

Pat has led over 30 rides, including the traditional New Year’s Day ride, weekly rides like the Slow Motion Thursday series and special informational rides like the Heritage Tree Ride in 2019.

The Jim Mooney Award (Member of the Year)

We would like to nominate Pat McManus for the Jim Mooney Award. We know that she is a member in good standing, has been active in the PBC since 2012, and meets the current criteria for Member of the Year. She has served as a ride leader in past years and introduced new and interesting rides such as those going to Portland heritage trees, those viewing outside art around town, those of a slower pace on Thursdays in the summer months, and those exploring Boring and beyond. She was on the planning committee for the Pedals and Pints event, offering valuable input as well as scoping out routes. The main reason, however, that we see her as a candidate for this award is her service as president for the last two years. These were challenging years, starting with the name change, which she handled fairly and successfully, including the rollout. And, this year, she was a unifying force in keeping the club running and viable when members couldn’t ride together or have club meetings. Her idea to hold Zoom meetings (and to use her own account) proved to be successful in helping to keep people connected and letting them have a voice in club affairs. Pat’s Top Talks were always well researched and pertinent, but this year they also helped communicate information and served to lift members’ spirits. We have always found Pat to be professional, open to new ideas, and a “get things done” member of the club.

We would like to nominate Lynn Blanchard for the Valued Member Award. We know that she is a member in good standing, has been active in the PBC since 2002, and meets the current criteria for Valued Member. In her role as newsletter editor, she has not been idle during this year when most members could not volunteer to lead rides or work events. She has kept the club informed, often soliciting articles, and researching great YouTube videos. The Quick Releases really made it seem like a lot was going on with the club and was our primary communication to members. She also sent out email blasts on important issues when requested. Her idea to form a team to ride and support the Reach the Beach ride was a huge success and, even though the ride ended up being virtual, raised over $4000 for the cause.

In 2020, a year I’m sure we would all like to forget, all official club rides ended on March 19th.  Sarah Hill led the “West Hills Roller Coaster” and that was the last official ride.  It was sad to look at our ride calendar and see ride after ride after ride shown in red ink with a horizontal line through it.

The club basically went dark at that point.  Our reason for being – to enjoy the comradery of riding outdoors with other like-minded people – that reason for being ceased.  There were no rides and no club meetings with interesting presentations.  The impact was quickly felt.  When it became time to renew club memberships, many didn’t; and our total number of members, both individual and family, started to drop.

After a complete halt that lasted several weeks, club members would occasionally ride and see or pass other members on their solo outings. Several individuals decided to take action and began to form small, informal meet-up groups. None of these were sanctioned by Portland Bicycling Club. But people wanted to ride, and they wanted to ride with friends. As word spread about these meet-up rides, small e-mail lists of interested riders began to grow. (Hey Chuck / Ann / Jeremy / Clay / Bud, can you add me to your e-mail list?)

Perhaps more than any other club member, three individuals kept the essence of being a club of bike riders alive and helped us through an extraordinary, difficult time.  As a result, the Portland Bicycling Club is still a viable, vibrant organization.

I am pleased to award the Newt Ackerman Goodwill Ambassador Award to Jeremy Wilson, Chuck Dorr, and Bud Rice.

The President’s Award for 2020 is for Lynn Blanchard.

She consistently put in a huge effort every month to keep our club in the public eye via her excellent editing of the Quick Releases. She also spearheaded our largest and most successful Reach the Beach team ever! Our PBC RTB team raised sufficient money to put our team in the top ten of this fundraiser organization. Lynn deserves many thanks from all of us.

Click here to see the complete history of Past Award Recipients.