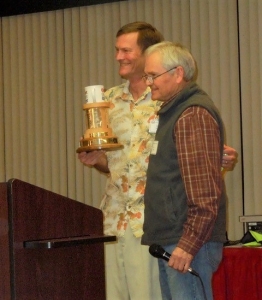 The annual Portland Bicycling Club banquet celebrating the 2019 activities of the club was held on January 26, 2020. It was attended by approximately 112 people consisting of club members and guests. This was a chance for non-cycling spouses or significant others to find out who their beloved hangs out with when they say they are going on a bike ride. I have said before and I will say it again, PBC should charge some of these non-cycling partners a fee to take their cyclists for hours at a time like we do. The non-riding partners get peace and quiet. PBC takes care of the riders, makes sure they get a cookie, and sends them home for a nap. Such a deal!

Our current vice president, Doug Myers, and his son Grant once again acted as masters of ceremonies. They just came as themselves; no costumes or award-winning acting, but they did a great job and kept the evening moving along in an orderly fashion. And Grant Myers entertained us at the outset of the program with a presentation on Italian Bike Design. It was very interesting and entertaining.

Elyse Berkovitch had sought photos from club members and had compiled a fun slide show set to appropriate music. Always a walk down memory lane and interesting to see photos not seen before on Facebook!

Tom Carter took delight in awarding Chuck Dorr the unofficial “Get a Life” award for the most rides ridden. Chuck rode 302 rides in 2019, an average of six rides per week. Chuck won this award in 2018 as well. Anyone out there planning to take him on this year?

The coveted OLD FART award was presented by Tom Carter as well. He was the recipient for 2018. Most presenters of this award make sure to state that it’s an HONOR to receive. You be the judge on that count. Tom also pointed out that no newbies are awarded the Old Fart trophy, and you need to be some sort of a character to get the nod. Doug Myers was thrilled to hear his name announced as the 2019 OLD FART. (Okay, fake news. Thrilled? Not so much.)

Khaliyah Williams-Rodriguez had a special award that included audience participation to thank Barry Emmerling and others for supporting her to become a ride leader in 2019.

The usual awards were given (see the February QR for details), and lots of raffle prizes were handed out. There was also a variety of items such as Otto locks, a bike stand, a multi-tool, a tool kit, and a jacket to name a few, that were given out as separate drawings. Only those interested in an item entered to win it.

A big THANK YOU to Bud Rice, Arden Shelton, Benn Schonman and his trainees Khaliyah Williams-Rodriguez and Elyse Berkovitch who will be taking Benn’s role for 2020. Also, Doug and Grant Myers. Great food, friends, and fun.