The annual awards banquet, celebrating the past events and activities of PBC’s 2019, was held on Sunday, January 26. I hope you were there.
The awards and the act of presenting them in a public setting are an important part of club life. They are some of the unifiers that bring us closer together as fellow cyclists. The presentations give us insight into some of our club members who we might not garner out on the road. We get introduced to members who we may otherwise not know because they ride different rides than we do or ride faster or more slowly, so we never seem to connect.

A total of 78 nominations were made. I’m going to share the winners and some outtakes from the actual nominations:

Well, the Comeback Award is the easiest – who fell off their bike and got back on? But please know that the committee takes all of this seriously and wants to maintain respect for the process and the awards themselves as the receivers are selected. Unfortunately, there were many candidates for 2019 and all who are qualified earn recognition. We don’t want to get into a competition allowing only the three most seriously injured to win, do we? In any event, these kind words were said about John Burkhardt and Clay Dudley, “Amazingly, both John and Clay were riding within several months and we are fortunate now to see both several times weekly on club rides. Their recoveries are a tribute to their conditioning and their very strong determination.” 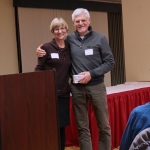 The Most Improved New Rider is often challenging because of the criteria: Joined in year of award or previous year but no later than October and rode under 500 miles previous year and rode 500 miles or more for the year award was presented. In fact, one nominee was omitted for not meeting the criteria. However, this was said of award winner John Francis, “He is always cheerful, excited to go for a ride…”

And there is the Most Improved Rider which also has some strict criteria. Comments made about recipient Michael Heffernan included, “…always riding in the group safely, very strong with good endurance.” 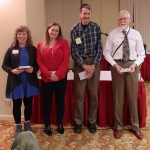 Our award for Volunteer of the Year can be challenging as well in that there are frequently many possible recipients. Aren’t we blessed with great people in our little bike club? What a problem to have. Some comments included: … “has done an outstanding job as our new editor…She has found appropriate pictures to accompany articles and added a video…,” regarding Lynn Thompson. And “for bringing his wonderful sense of humor to everything he does,” a plug for Robert Schroeder.

The Newt Acker Goodwill Ambassador award acknowledges a member who represents PBC well. Part of the nomination verbiage for the winner included, has “…always been a good-hearted friendly face to all who encounter him on a ride, at a meeting, or at an event.”

The recipient was Eric Hendricks. 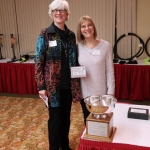 The coveted award for Ride Leader of the Year almost always 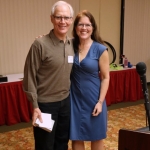 includes Bud Rice getting nominated at least once. Why is that? Well, because we love the guy, and he leads more rides than anyone. But the praise must be spread around to some of our other wonderful ride leaders. For example, a few of the kind words said about Barry Emmerling and Marci Ray by one of their nominators included, “…are the most welcoming of ride leaders. They watch out for everyone…” 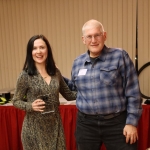 Our Valued Member of the Year is also a significant acknowledgement and sometimes will include a member nominated for the Jim Mooney Member of the Year award. There were several nominations in this category and it’s heartwarming to see such respect and appreciation for other club members’ efforts. An excerpt from one nominator’s comments for recipient Mark Klein included, “…vital to the STP event, which currently is a component to the survival of our club.” 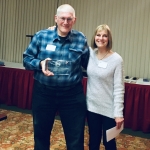 Finally, the REALLY BIG AWARD is the Jim Mooney Member of the Year. Criteria for this one is a little more stringent, and the nominees are always scrutinized to be sure they meet the guidelines. In fact, one nominee was eliminated due to not having been a member of the club long enough. One nominator had done their homework and checked all that criteria carefully and assured us the proposed individual met it. Also mentioned in this nomination for the ultimate winner were these kind words: “…also known for ‘helping out’ on rides, always stopping to help with a flat or mechanical problem.”

The recipient was Alan Coppola.

Who reads these comments and determines the annual winners? The awards committee meets early each new year to read and discuss members’ suggestions and select the various winners. The awards committee consists of previous Jim Mooney Member of the Year recipients. Winning the award includes the tradition to attend this annual meeting the first Sunday in January to help select future award winners. Typically, 10 to 15 past Members of the Year invest in the process by analyzing the criteria against the proposals and then weighing the overall impressions. It’s not easy! PBC is heavily populated with some great people who not only ride a bike well but share their skills and abilities for the club’s benefit.

Additionally, the committee typically assigns committee members as presenters, or some volunteer for the privilege. This may sound elitist, but we want to keep this information contained and it’s a natural progression to have past winners have the honor of presenting awards to other recipients. However, some of our committee members are just like many others, they don’t like public speaking! So, we might reach out to a member for a presentation, usually one of the nominators.

In 2020, as you enjoy your journey with Portland Bicycling Club, please really SEE your fellow club members and the value they hold for our organization. Make a few notes along the way so, come December, you will have some wonderful, thoughtful, persuasive nominations to share.