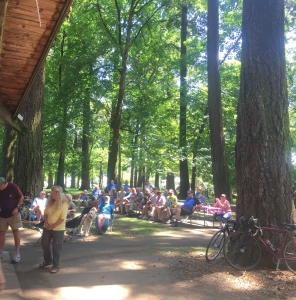 Thanks to those who attended the picnic on August 4. We had a turnout of around 75 club and family members. The food was potluck style, allowing us to focus on prizes for the raffle. Prizes were purchased from Western Bikeworks, River City Bicycles, Starbucks, and Regal Cinemas. Western Bikeworks was gracious enough to donate some swag for our raffle (including Castelli T-shirts).

It was a great day and, luckily, we all managed to beat the heat before the temperature reached 90°. Hopefully, the same will go for next year!