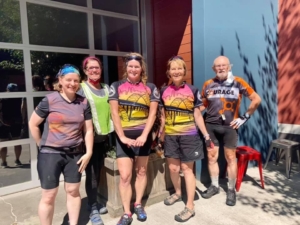 Earlier in the year, in an effort to be more welcoming to new cyclists, we began a new ride series that we dubbed “ROOKIE RIDES.” Our little committee, formed around the notion that we (Portland Bicycling Club) needed some truly slow and easy rides, felt that term would resonate with cyclists looking for beginner rides.

You may have seen some of these rides listed on our ride calendar. You may have passed right over them, not identifying as a “rookie” yourself and therefore not finding any appeal in such a short and slow ride. Others, particularly newer riders and those getting back into cycling after a hiatus, have seen the appeal and joined us on our fun routes. It has been a limited response but there have been ROOKIES and BACK IN THE SADDLE participants. Some have become new members to the club.

Our objective was to have at least two such rides a month during the summer months. These rides will end after September as it has been my experience that new riders do not have the interest or gear to come out in the rain and cold. We will resume next year, probably in May.  ✎ 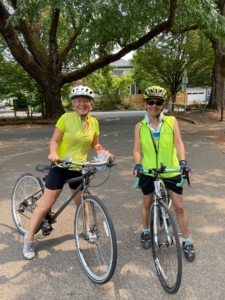 Some of our rides have been taken from the Portland Bureau of Transportation who posted several perfect routes that we were able to implement and use for these purposes. Recently I used the classic Waterfront ride between the Steel Bridge and Sellwood Bridge. I’ve also used a route from Todd Roll’s PEDAL PORTLAND. Cindy Bernert-Coppola has led a few as well. Other members have joined us to add support for new riders which is a huge help. For example, I had a couple of new riders on one Rookie Ride and both Kathleen Hellem and Dave McQuery were able to encourage and advise them as I rode up front. Dennis Hogan has assisted Cindy; John Joy has been another volunteer. Lynn Blanchard has her Short & Sweet Series as well which are welcoming to more novice cyclists.

Thank you all for your support. The preamble or mission statement of our club begins: “The aim of this organization shall be to promote the general interests of cycling in all its phases…” I firmly believe that this new series, our ROOKIE RIDES, reaches an important group of cyclists, novice cyclists, who need a little support and guidance to develop their passion of cycling.