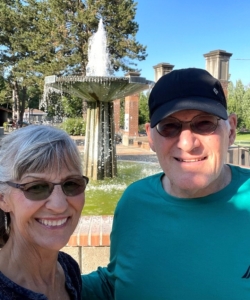 For some time, Alan and I have been wanting to do what we refer to as a “credit card” bike tour, where we only need to carry a change of street clothes, a pair of sandals, and our toiletries. The original plan was to bike the Willamette Valley Scenic Bikeway from Aurora to Eugene, with an overnight in Independence, and take the train back to Canby. Our anniversary was approaching, and Alan said, “How do you want to celebrate?” Of course, I wanted it to include a bike trip! His brother jokes that I will be the death of Alan because I’m always dragging him along on physical adventures. But he’s a good sport and always agreeable.  ✎ 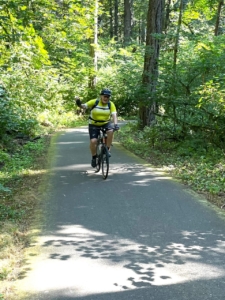 Alan on the Champoeg Trail

Schedules didn’t allow for the three-day trip, so we shortened it to just Independence and back, a two-day trip. My Roubaix won’t hold a rack, so this meant a backpack for me. Alan took his normal pack (which you all know is quite heavy) and one pannier on the Lynskey. We had been wanting to try out the Independence Hotel, because they advertise as being bike friendly and are not far off the scenic bikeway. So, we made our reservation for the “Date Night” package – a lovely riverfront balcony room and up to $100 for dinner at the Territory Restaurant. Our friends, Debbi and Jon, who live on the Willamette about 2.5 miles east of Butteville, offered their roadside acreage for parking. 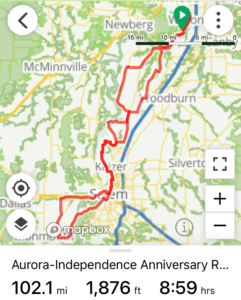 I developed the RideWithGPS map, following roads we already knew and including much of the scenic bikeway. This screen shot of our route that Alan stitched together shows the actual route we took. As with any route that you develop on the computer, it had a few glitches. We had done the Monster Cookie ride several times but never through Salem and down to Independence.

We started by taking the Champoeg Park bike path through the park, then headed down French Prairie and over to St. Paul for a coffee break at Banker’s Cup (where we would discover the next day that I had left my credit card!). The plan was to lunch in Salem, then finish off the last 14 miles, and check into the hotel. We didn’t leave as early as we should have, and there were LOTS of trucks on the road. 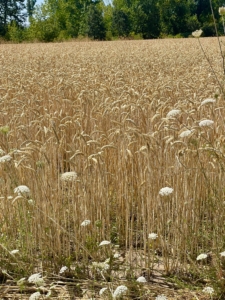 Still, the hops, flowers, vineyards, wheat fields, and vegetables did not disappoint. Navigating through Salem was a bit confusing, but we finally stopped at Mama’s on the Go Bistro and shared a Garden Goddess sandwich (dee-lish!). From there, we thought we would have a bucolic ride on the scenic bikeway into Independence. Not so! Once on River Road, we had a path on the wrong side of the highway for about a mile, then crossed over to the right side. It’s hard to believe they call this a scenic bikeway. 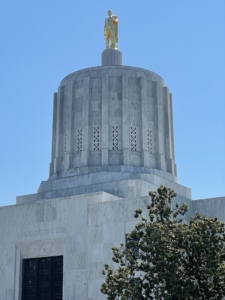 Yes, there was a bike lane MOST of the time, but traffic was heavy all the way, and there were hills and tight corners. Not the most relaxing way to end the day. When we reached the river, the scenic bikeway turned, and to get to Independence we faced a bridge with a very steep ascent, no bike lane, and a sidewalk too narrow for riding. We got off and walked the sidewalk. When I got to the top, and the traffic let up slightly, I ventured onto the road, and took it to the end – lots of trucks passing me closely! The good news is that once we turned right on Main Street at the base of the bridge, our hotel was just a mile ahead. Yay! 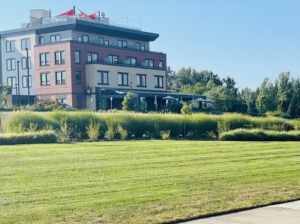 We were impressed with the hotel. Staff were friendly, the location was beautiful, and it was a short walk to shops and a park. We enjoyed dinner on the outside patio with a caprese/pita appetizer and steak with roasted vegetables! The next morning, breakfast was included and opened at 7 am.

Since we didn’t want to go back the way we came, we ditched the RideWithGPS map, and Alan found one that stayed on the west side of the river into Salem. It looked promising at first, but the last 10 miles were on a sidewalk on the left side of Hwy 22. While safe enough, it was loud and full of glass, debris, and roots. Once over the bridge, we quickly found a coffee shop (earned that croissant) and then hooked back up to the scenic bikeway for an uneventful ride back. Since we returned via Case Road, we missed the nice bike path to Butteville and faced a few nice hills instead.