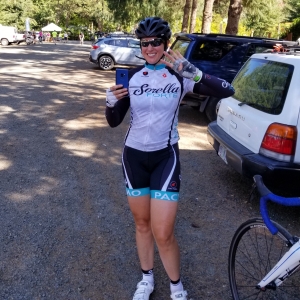 The Vineyard Tour started and finished at Discovery Garden just a few miles outside of downtown Roseburg. Yes, a three-hour drive from the Portland area, but easy travel down I-5 on Saturday and again coming back after the ride on Sunday. Monique provided the car and did all the driving, which is a real luxury for an old man like me. We had done century rides on the previous three Sundays, August 11, 18, and 25, so we decided to call Sunday September 1 our August 32, thus letting us have all four centuries in the same month. We’ll call that poetic license. 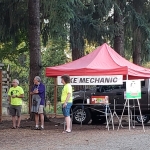 The tour had 161 riders, and it seemed they had almost that many volunteers helping to put on the event. One nice touch, there was a bike mechanic at the start in case anyone needed some tuning up before the ride. Good crew at each rest stop, along with plentiful and tasty snacks. One rest stop, the one at the fancy winery seen in several of the pictures (click here to see more photos), even had SPAM on the snack table! I hadn’t tasted that in many years.

Some of the volunteers – the ride is put on by the Umpqua Velo Cycling Club, by the way – were out on the road during the ride moving the stick-on arrows. At least one road saw double-duty, used in one direction early in the day, then in the other direction later; so some of the arrows had to be pulled up and replaced once the riders had passed a certain point to indicate a different way later in the ride. That was right near one of the rest stops, which we visited twice, and the volunteers were diligent about asking each rider which route we were doing (century, metric, and so on) and pointing us in the right direction as we finished snacking and got ready to resume riding. 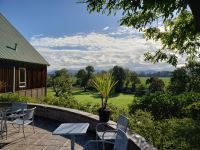 Scenery was great! Those three words could be repeated over and over to describe the entire route, and in most cases traffic was light. There was one stretch of about five miles when we were on a highway, but there was a nice wide shoulder, smooth, and almost completely clear of debris. There still wasn’t much traffic on that road because there just isn’t a big population down in the Roseburg area, so their version of “crowded” is very light compared to Portland’s version of traffic.

For the fourth consecutive Sunday, we had very good luck with the weather and with our bikes. Some early morning clouds in the Roseburg area, but the sun quickly burned them off, and we could see our shadows the entire day. I think that means we get an extra six weeks of summer, but I’ll have to check the almanac. And our bikes worked – no flat tires, no shifting problems, no broken chains – so that was nice. It’s not ALL about luck, of course, as we had each gotten our bikes to the shop for tune-ups before embarking on this “four centuries in four weeks” quest. Much better to prevent trouble than to try to make roadside repairs, right? 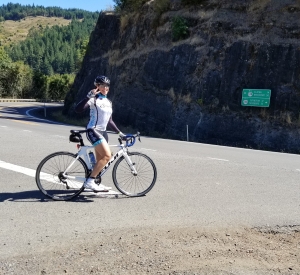 There were hills on this ride! Several climbs of three or four miles, one that was about five miles, but none so steep as to be impossible. Let’s call them “challenging,” even the one that finished at mile 89 or so, where we naively convinced ourselves that we were done climbing for the day. Not so! We rounded a curve at about mile 96 and saw the road tilt upwards at a rather strenuous angle, and Monique blurted out . . . gotta keep it G-rated here . . . “Darn it!” That’s not quite verbatim, but you can imagine the feeling of discovering one more steep pitch in the final miles before the finish line, just when you think you’re done with the whole low-gears thing. We made it, though.

All in all, we had a great time, and highly recommend the Vineyard Tour.

With much thanks to the Portland Bicycling Club, especially to Craig Hill and Ken Norland* for giving us their free passes to the Vineyard Tour,

*Editor’s Note:  The Umpqua Velo Cycling Club donated two free passes for the Vineyard Tour to the Portland Bicycling Club. In a raffle held at the PBC member meeting June 6, Craig Hill and Ken Norland each won a free pass.