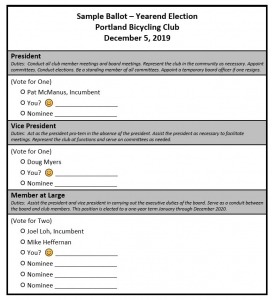 At the December club member meeting, an election will be held for the following offices: president, vice president, recording secretary, membership secretary, treasurer, one road captain, and two members at large. The nomination committee for the approaching election is comprised of Chip Kyle, Alan Mevis, and me. Candidates nominated to date will be presented at the club member meeting on Thursday, November 7, at 7:00 PM; I’ll provide a brief introduction of the new candidates running for vice president and one of the member-at-large positions; and additional nominations will be accepted from the floor.  And there will be pizza!