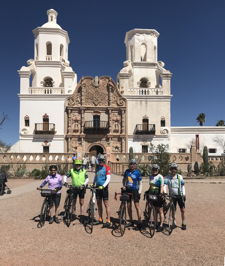 For the fifth year, Elaine and I traveled to Tucson, Arizona, to join 15-20 fellow club members for some terrific bicycling.  Under the always helpful tutelage of Roger Harris (a Portland snowbird who resides in Tucson for five months of the year), ably assisted by John and Karyn Mardis (also Portland part-time snowbirds), we rode different routes every day, except when the weather wasn’t great for riding.  Bad cycling weather in Tucson does not mean rain or snow, but it usually means strong winds. On such days, it’s better to hike or sightsee some of the many tourist attractions in the Tucson area.

This year, when the weather was not perfect for biking, we hiked in Sabino Canyon, a beautiful area on the east side of the city.  One day, our group visited the Pima Air Museum, third largest airplane collection in the U.S.  On another day, we traveled to Tubac, an arts community 30 miles south of Tucson.

While there are plenty of tourist options in and around Tucson (e.g., national parks, the University of Arizona campus, museums, etc.), the main attraction remains bicycling!!  Tucson is home to nearly 130 miles of paved off-road bicycle trails through and around the city.  The trails are beautifully landscaped, feature abundant public art on overpasses and bridges, and have good signage.  It is wonderful biking, especially in March, when temperatures usually don’t peak above 80⁰, skies are clear and dry, and there are many club members visiting with whom to share the ride. 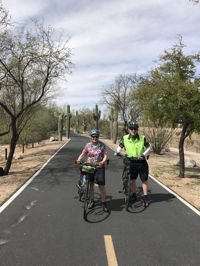 Our daily rides were in the 20-35-mile range, and most often led by Roger with support from John and Karyn.  Frequently Roger, John, and Karyn would ride to the hotel where some of the Portlanders were staying (the Tucson City Center.)  We met at 9:00 or 10:00 a.m., depending on the ride length for the day, and left together as a group.  There was always a coffee break midway through the ride, and we found some fabulous bakeries!!

Any visit to Tucson by Portland cyclists will include a visit to the “Bike Church,” a non-denominational structure created by local high school industrial arts students, completely fabricated from bike parts.  The top of the wall includes six circular stained-glass pieces representing all religious faiths. The floor of the church is made of bricks inscribed with names or messages of bike safety which were sold as a fundraising project.  Through the efforts of Roger Harris and with some financial support from Jerry Smith, our club now has a large piece consisting of six bricks and dedicated to biking safety.   The piece was designed by club member Benn Schonman and was manufactured in Tucson.  The Bike Church is dedicated to bike safety, and was inspired by Jean Gorman, mother of a Tucson bicyclist who was killed by an automobile about four years ago.

Tucson is only a two-and-a-half-hour airplane ride away (or two-day train ride), so it’s relatively close.  If you have not had the opportunity to visit and bicycle in Tucson, I would encourage you to put it on your to-do list for next spring, when we in Portland are normally living under gray, cool skies, and Tucson is basking in 65-80⁰ and clear skies.  It is a terrific getaway and a treat to ride with so many other club members!