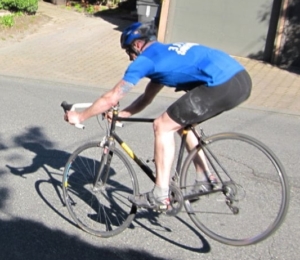 Years ago, I was helping one of the Community Cycling Center mechanics who was teaching a basic bike mechanics class. It was an eight-week class meeting for three hours on Monday nights. We went through the standard stuff. Week by week, we covered:

When we got to brakes, about half the class seemed to feel that using the front brakes was not only unsafe, but potentially disastrous.  ✎

I had only recently become a fan of Sheldon Brown’s website and his beyond encyclopedic* knowledge of bicycles. As it turned out, I had just finished his treatise (there is no other word) on “Brakes and Turning.” I e-mailed the author that night asking if I could reprint his article for the class. Amazingly, as busy as he was, he wrote back the next morning not only giving permission, but even encouraging me to print and distribute it. It covers not only braking, but also how to use the brakes in a turn.

Lamentably, Sheldon Brown died in 2008 on the same day I was building my first wheel using the instructions I had downloaded from his website. His website has continued on with many updates and comments from others. John Allen maintains and updates the site along with Sheldon’s wife, Harriet Fell. An excerpt from the article appears below.

Since your bike has two brakes, one for each hand, if you want to stop as safely as possible, you need to pay attention to how you use each of them.

Conventional wisdom says to use both brakes at the same time. This is probably good advice for beginners, who have not yet learned to use their brakes skillfully, but if you don’t graduate past this stage, you will never be able to stop as short safely as a cyclist who has learned to use the front brake by itself.

Excerpted from “Brakes and Turning” by Sheldon Brown, with updates by John S. Allen (1997, 2008). For the full article, giving the reasons the front brake is your best friend, go to https://www.sheldonbrown.com/brakturn.html