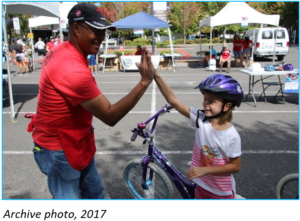 Wear a helmet! Those are the parting words, repeated too many times to count, over the past 25 years of NW Bicycle Safety Council’s history here in the Portland metro area. Safety, particularly in the form of wearing properly fitted helmets, has been our passion.

Bicycle safety is not a unique niche in a bicycle-fevered area such as we live in, but it’s a message taken on in 1998 by Portland Wheelmen Touring Club (now Portland Bicycling Club) and then assumed by former NWBSC President and Founder Bruce Buffington of Beaverton. His own fall from a bike, while helmetless, caused an epiphany that he worked on tirelessly for decades: Helmets, properly fitted on heads, large and small, do a job and protect brains.

Through the years over 17,000 helmets were placed, free of charge, on heads around the community. Working with Beaverton police there was often a bike fair of some sort at a local elementary school or events such as Bike Beaverton. The obvious connection is that safe riders, outfitted with a helmet, are in fewer accidents; and hopefully are not just lawful cyclists but age into becoming safe motor vehicle drivers as well.

Other NWBSC activities included an event ride that locals may recall – Beaverton Banks and Beyond Bicycle Tour which utilized the then new Banks Vernonia Linear Trail as part of its route. Popular for its rural route in scenic Washington County, and friendly volunteers and sponsors, it was a favorite for many. Also, NWBSC produced the public access television show Cycology Today on Tualatin Valley Community Television, which also promoted bike safety along with the simple joys and passions of local enthusiasts.

If I may share the sentiments of former volunteer and advocate and former PBC member Gary Brannan:

Since Bruce Buffington created NWBSC over 25 years ago, he and its volunteers have done far more than simply give helmets away; they’ve promoted the value of them, personally fitted them; conducted clinics and bicycle events, including instruction to folks of all ages; collaborated with local law enforcement; offered free bicycle registration, maps and other pertinent literature; collaborated with the Portland Bicycling Club, one of the largest in the Pacific Northwest, in the formation of a helmet committee to extend the range of ‘bicycle safety consciousness’; coordinated their activities with Legacy Emanuel Hospital’s ‘Trauma Nurses Talk Tough’; donated helmets to the Marine Corps Toys for Tots local drive; and even created and conducted a local television program, “Cycology Today,” which focused on bicycle safety and life in our bicycling community. For some time, Bruce choreographed, produced and conducted the program, and then turned it over to Ann Morrow, past president of the Portland Bicycling Club, and president of NWBSC, who has been a ‘rock’ in the council for most of its life.

It’s impossible to know how far NWBSC’s influence reached and, literally, how many lives it saved; but in the span of over 25 years it’s bound to have been significant. No organization succeeds without good leadership. For NWBSC that credit goes to Buffington, whose quiet, friendly, yet infectious demeanor, and a wonderful mission and mission recipients, made talented, caring people want to be a part of it.

Their mission: “To educate and promote safety and harmony between cyclists and others who share the road, as well as strengthen community and family ties through cycling-related programs and events.” Well, they certainly achieved that and more, and our extended community is all the better for it; thanks to Bruce Buffington for creating it and managing its direction.

A prominent army general once said, “Old soldiers never die, they simply fade away,” and our greater community will continue to benefit from the ‘seeds’ that Buffington and his organization ‘planted.’ 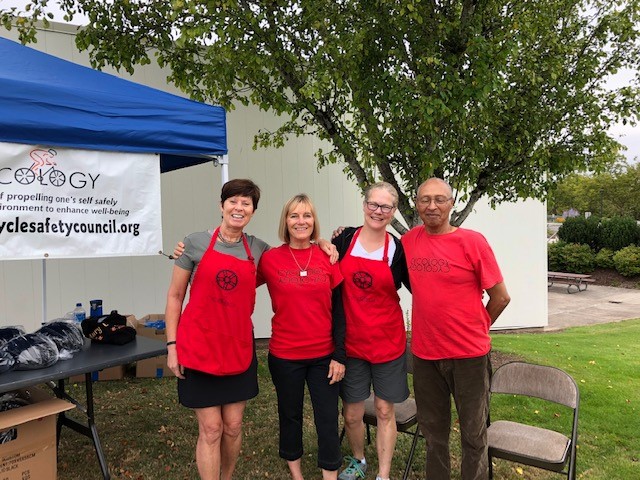 Cycology Today will continue under the guidance of the volunteers trained by Bruce Buffington. The mission of NWBSC will also continue, with a transfer of assets to the nonprofit Bike Clark County in Vancouver, Washington.

Our monetary and volunteer resources have gone back into this wonderful big neighborhood of ours. We are proud of our participation in events such as Bike Beaverton, Tualatin Hills Parks and Recreation Party in the Park, Cedar Hills Crossing Safety Fair, Scooping with the Sheriff, and safety fairs at multiple local schools.

It’s been a wonderful journey and we will always cherish the opportunities and relationships afforded us.