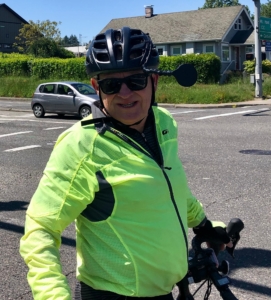 Bike safety is so important. It is critical as cyclists that we are easily seen. In reviewing information about bike safety, I came across a helpful article I would like to share.

It is “The Brightest, Most Visible Safety Colors for Cyclists and Runners” by Matt Heid, Appalachian Mtn Club.

“Are you a bicyclist or runner? Do you want to reduce your chances of being hit by a car? Consider this: The brightest, most visible color you can wear during daylight hours is fluorescent yellow-green. Why? Human eyes are built to be most sensitive to that particular wavelength of light (~550 nanometers), at least during the day. But when the sun begins to set and light starts to dwindle, your perception of color starts to change.”  ✎ 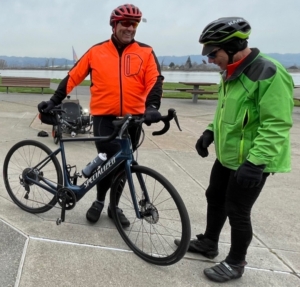 “When it comes to cycling and running, there is not nearly the level of scientific studies or standards in place for high-visibility clothing. The takeaway from the national standards, however, is that only three colors meet its rigorous criteria: fluorescent yellow-green, fluorescent orange-red, and fluorescent red. (And, of course, reflective stripes for nighttime visibility.)” 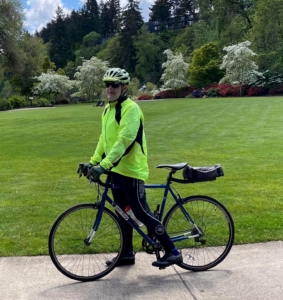 “As mentioned above, fluorescent yellow-green is the best choice during the day – and best all-around choice for a single color. But as dusk sets in and lighting gets dim, orange-red and red start to become more prominent. (It has to do with the fact that your eyeballs rely on both rods and cones to see colors, that it uses them in different combinations depending on ambient light levels, and that rods and cones are more sensitive to different wavelengths of light.)”

“The takeaway from all this? The safest, most-visible combination of clothing would include all three colors. A yellow-green vest over an orange-red jersey, for example. But even if you don’t tri-color your way across the landscape, do the bright thing: Pick at least one of them – and wear it!”