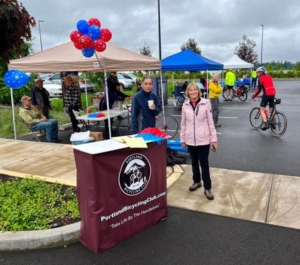 After three years, the return of the Pioneer Metric™ took place on the same day as the traditional Portland Rose Festival’s Grand Floral Parade. So, what does this mean? Possible late spring, pre-summer weather conditions are expected? Grey skies and threatening showers and a thorough drenching the day before, conditioned the hardy souls who pre-registered and dissuaded potential day-of riders.

One hundred sixty people pre-registered, 152 through the PBC website’s Ticket Spice service and eight mailed in their forms. Of the 160 pre-registrants, 102 selected the full metric distances of 61 or 64 miles and 58 chose the 34-mile option. Fifteen riders decided the morning of the ride to register, nine choosing the longer routes and six the shorter route.  ✎

Of the 175 total registrants, we accounted for 111 bicyclists actually on the roads, meaning 64 of the pre-registrants stayed home. Those remaining souls encountered multiple high-water conditions, sometimes rushing across the entire road and forcing riders to lift their shoes off the pedals to keep their feet dry. There were some signs closing roads to vehicles causing some early morning detours for the rest stop volunteers and delivery truck. But luckily all survived and there were no reported accidents and only a few missed turns.

The new start/finish at Columbia Distributing in NE Canby worked out well for an inaugural location. Access to the three routes was good. There was ample space for the two registration booths and the coffee/muffin booth. Special thanks to Cindy Bernert-Coppola and Alan Coppola for bringing their own personal generators to enable brewing of the 110 cups of coffee. 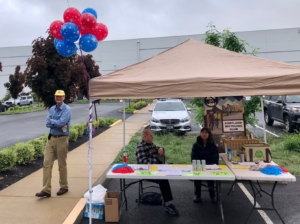 The list of thank-yous begins with Doug Myers, who early on planted the seed of the return of the Pioneer Century®, albeit in a scaled down version. Doug secured the new location, after the traditional start location at the Clackamas County Fairgrounds was not available. A new course was laid out by Doug, and Ron Ing created the maps. The courses were marked a week before the event with directional symbols, painted on the roads by team leader Ron, assisted by Ken Norland, Dave McQuery and Dennis Hogan. Dave went out the Thursday before the weekend to check that all the marks were still fresh and not vandalized.

Preliminary groundwork communications were handled by Doug. Many ideas were discussed regarding sponsorship, advertising, pricing structure, fundraising benefactors and all the other myriad of ideas, but none gained enough traction with board members or invested club members, to be implemented in a timely fashion. 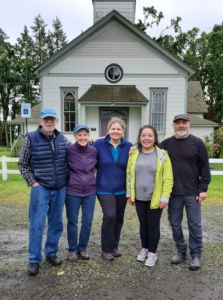 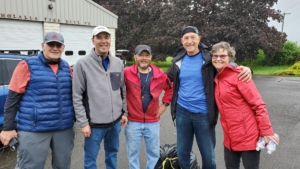 I, as the volunteer coordinator, crafted a leaner crew of helpers, for the first time enlisting club members to work the two rest stops, which in previous years were ably run by private social groups. The logistics of the simplified course offerings gave hope for a successful event. Thank you to our Sawtell rest stop volunteers, led by team leader Nyna Payne, Stacy Barbadillo, Mark Klein and Cheryl Jensen. Our second rest stop at the Elliott Prairie Community Church was led by team leader Pete Schmidt, Elaine Schmidt, Jeff Willensky, Christi Horton and my wife Nancy Chu. 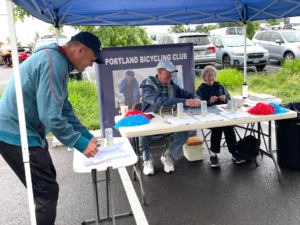 Route safety was looked after by Richard Higgins, who directed riders to the bike path, and SAG drivers Eric Hendricks, Dennis and Kathleen Hellem were busy looking out for tired riders in need of assistance and transported a number of them safely back to the finish. 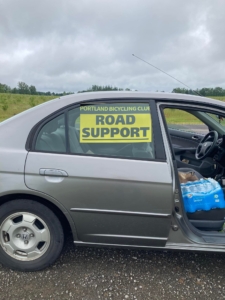 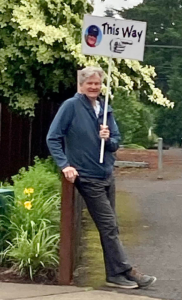 Coordination and communication between the SAG drivers, start/finish headquarters, and the rest stops, facilitated an orderly breakdown of the rest stops and the timely loading of unused food/supplies back into the rental. My co-pilot, Alan Coppola, kept me on the most direct roads between multiple trips to the rest stops. After the ride, many items were distributed to local food banks and organizations by our rest stop volunteers, since the fruit perishables could not be stored. This same distribution of items was repeated at the finish. We had estimated about 200 riders, and with only 111 on the road, this resulted in many leftovers. The excess water and soft drinks will be used at STP and our club picnic.

After picking up the rental truck on Friday, loading it at the storage unit was with the help of Alan Mevis, Denise Hare and Dave. Arden directed the Costco shopping, with help from Ashley Reynolds, James Liu, Dave and me.

The rental truck was returned on Sunday after unloading and returning the contents back into storage. Assisting me in this task were Clayton Hawkes, Alan Mevis, and Kurt.

This event was successfully accomplished with the help of all of you. Personal family issues affecting the primary key players of Doug, Cindy and myself threatened to derail this event. Somehow, we prevailed.

Let a board member know what you thought of this year’s event and what you might like to see for the future:

Send your thoughts and ideas to [email protected]