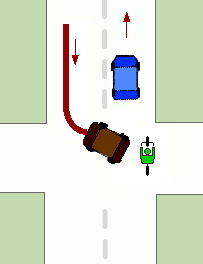 That is a quote from a PBC member who recently was struck by a left-turning vehicle, the driver of which made the admission within the quote. Why did he not see the cyclist who was clearly there to be seen? Where was he looking?

The cyclist was proceeding through an intersection on a two-way, two-lane street. The intersecting street was a one-way with traffic approaching from the cyclist’s left. The offending vehicle was oncoming, facing the opposite direction, presumably proceeding through the intersection, no turn signal being displayed. Stop signs controlled the vehicle and cyclist in crossing the intersection. The cyclist was most of the way through the intersection when the car suddenly made a left turn and struck him, sending him and bike to the pavement. Apparently, the driver was looking for traffic to his right. Fortunately, the cyclist’s injuries were not so serious as to require a trip to the hospital.

A variety of left-turning vehicle scenarios pose risks for cyclists. As happened this time, not being seen by the motorist is a common cause.

Therefore, making yourself MORE VISIBLE is the primary preventive. What can be done?

Mount flashing/pulsing lights front and rear on your bike. Regarding the left-turn scenario, called the left cross, the front light is most relevant. Don’t go cheap here. Those tiny, pinhead-size lights are not effective; they won’t grab a driver’s attention. The best ones can light up a street sign from a block away even in daylight. They give you the best chance of being seen by an oncoming driver, not to mention crossing vehicles whose drivers are mainly concerned with approaching cars. Keep your light charged up. Don’t wait until the battery is almost drained. If your light is non-rechargeable (which I prefer because batteries can be replaced mid-ride), keep a set of replacement batteries in your kit. I also prefer the rechargeable batteries which are less expensive long term and the environmental thing to do.

There are situational things to keep in mind. Most common is other cars blocking another driver’s ability to see you. So, when proceeding straight alongside vehicles, don’t overtake vehicles to your left which may obscure you from the view of oncoming motorists as you enter the intersection. If you do, you may suddenly appear at the last moment in front of a left-turning driver who could not see you seconds earlier. Also, be alert to the same situation but where you are diagonally behind a vehicle and there is a gap into which a left turner might try to shoot the turn. Again, his vision is blocked by the vehicle diagonally ahead of you.

The PBC member’s accident did not involve other traffic. The driver’s vision was not blocked and there was no turn signal warning. What can be done if you don’t attract the driver’s attention? Try to see where the driver is looking. If not looking at you, you could slow down or stop until making eye contact (a safety precaution in many situations). Focus on the vehicle, maybe just the left front tire, for any hint of an impending turn.

Sometimes, what warns you that something is about to happen is a matter of intuition, which only works if you are ALERT. Focus on the road and traffic, and the constantly changing situation. That computer in your head is capable of producing algorithms of accident avoidance. Use it!