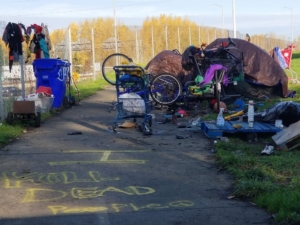 As you read last month, the bike troll was removed from under the railroad bridge. Well, he has set up shop a little north of the underpass and has put the new tent given to him by the City over halfway into the path. This photo was taken December 1, 2021.

Jonny Lewis was trying to get the property posted again. I think that has not happened. I went by today, December 18, and the bike troll was still hogging the path. 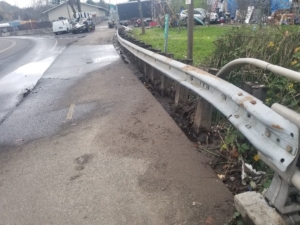 The guy with the black pickup parked on 105th and NE Alderwood has moved his stuff from the bike path. I was there December 18, and he showed me that he had dug a ditch so the water on the west side of the path would run off into the slough instead of swamping the path. There are still water issues, but they seem to be coming from under the freeway.  ✎ 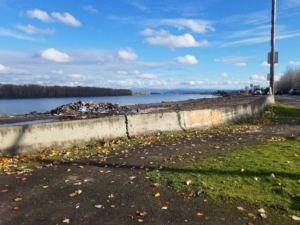 On December 1, Rapid Response had scooped up the trash from the end of the bike path at Marine Drive. As of December 18, the trash is still there. Once they remove the trash, the Portland Bureau of Transportation is supposed to put concrete barriers up along Marine Drive to the east so RVs won’t be able to park there. 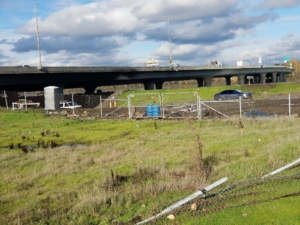 They have also removed the RV on the south side of Marine Drive, so there is currently no one occupying the bike path from NE 105th & Alderwood north to the Columbia River! I don’t know who belongs to the porta potty.

More news. As of December 17, Jonny Lewis has resigned from his job at the City to take on a job with the Portland School District. They don’t have a replacement for him at this time. A thankless job.

He did tell me that Rapid Response has received five more trash trucks and they hope to have them staffed by mid-February. Their response time prior to Covid was three to four days. Now it is 33-plus days. No wonder the trash is winning….

The Portland Police Bureau has reinstated the Neighborhood Response Team. Eighteen-year veteran Sgt. Jennifer Butcher has been put back on as team leader. They deal with situations like removing belligerent campers, etc. She only has two other officers and currently one was injured a few days ago in an incident that has him off work for a time. Darn…

Thus, it looks like things are beginning to brighten up for us I-205 bike path users. Hopefully, some gains will be made by summer.