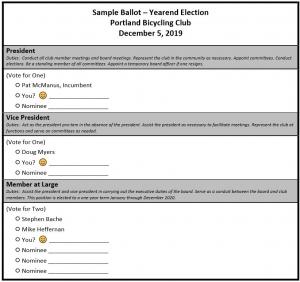 At the December club member meeting on Thursday, December 5, at 7:00 PM, an election of officers to serve on the club’s executive board will be held. Each position is for a one-year term beginning in January 2020. The list of candidates to date includes:

Additional nominations from the floor will be accepted on the date of the election. All candidates shall be elected by a plurality of the total votes cast for each office. If, however, a candidate is running unopposed, then the members present may choose to elect that candidate by unanimous acclaim.