I have been in contact with Jonathan Lewis, Program Coordinator for the Portland office of the Homelessness and Urban Camping Impact Reduction Program, and Courtney Norrish, Urban Camp Coordinator for ODOT (Oregon Department of Transportation). This is regarding the issue of the habitual blockage of the 1-205 Multi-Use Path (bike path) under the railroad bridge just north of NE Sandy Boulevard and NE Killingsworth Street (Hwy. 30 Bypass).  ✎ 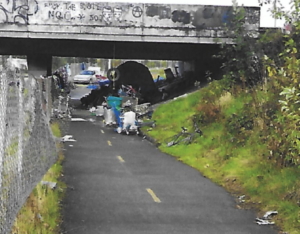 Heading north on path. Killingsworth and Sandy Blvd. behind you. That is the Union Pacific Railroad bridge.

As many of you know, the guy who lives under the bridge parts out bicycles and hangs the frames on the fence as well as stores his other treasures in the path right-of-way.

The path was completely blocked until I stopped and moved the trash off to the side of the path. 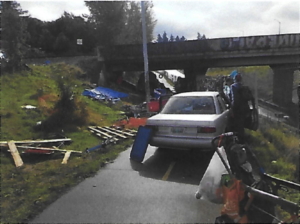 No cleanup as of November 8. 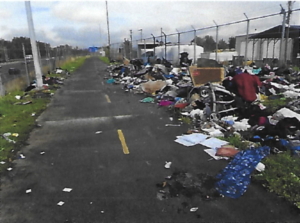 150 feet north of the railroad bridge.

There had been no cleanup of the trash as of November 8th. Here is why: There are two cleanup trucking entities involved here, Clean Start and Rapid Response. The problem here is a lack of manpower at those two companies. Both companies have trucks that sit idle because there is no one to operate them. Instead of being a week or so behind, they are now months behind! 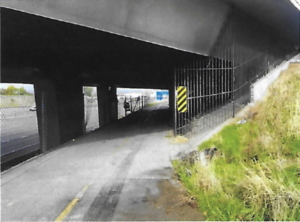 Looking north under Sandy Blvd. bridge. Here is what they did a few years ago to keep campers out from under the Sandy Blvd, bridge. There has been no camping there since.

On November 3, 2021,1 talked with Courtney Norrish of ODOT about having them put fencing under the RR bridge to keep campers out.

Courtney said she would contact the railroad to see if ODOT could put a similar enclosure under the RR bridge. She also told me that ODOT now has funding to do these kinds of projects. I also told her about campers under the Division Street bridge. That would be easier to do, as ODOT is in charge under that bridge.

If you would like to add your input on this or any other homeless issue, you can just dial 311 and you will immediately get a person to take your input. Maybe if enough people call, the squeaky wheel will get the grease to get this problem solved.

You can also contact Jonathan Lewis at [email protected]

Yippee! Rapid Response removed the trash and tent from under the railroad bridge! 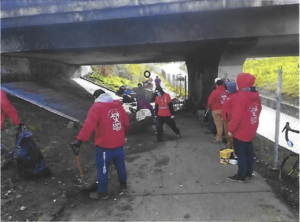 They took the trash from north of the RR bridge too. 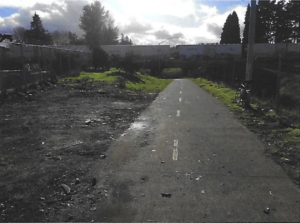 Joel Loh and some other club members were just coming back from a ride and were amazed to see the cleaned-up path!

They had turned this place in multiple times without success. Unfortunately, the bliss only lasted for a few days. On November 9, 2021, when I rode by, the bike troll had put up his tent just up the path from under the bridge. 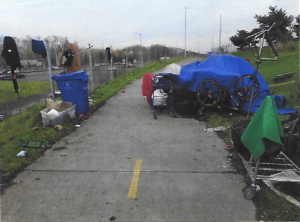 He has a couple of nice bikes parked under the tarps.

However, there is some good news to report. 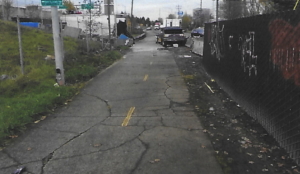 The trash has been removed from in front of the pickup truck parked at 105th and Alderwood.

Most of the RV’s are gone from Marine Drive. Sgt. Jennifer Butcher of the Portland Police Department told me that almost half of the RV’s parked there were stolen! 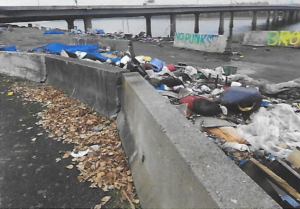 Just hold your nose as you cross Marine Drive. The smell is not pretty. I think this will be cleaned up soon.

So, this is my report. I am not quitting on this project until the bike troll’s tent is moved off the right-of-way.