Member Memories: STP in One Day 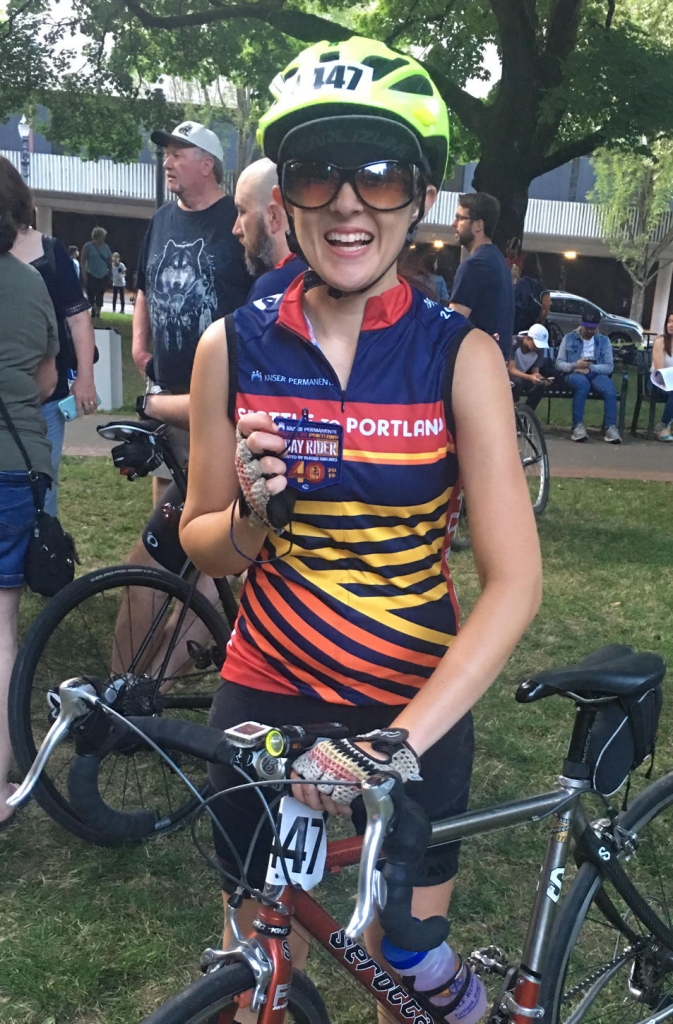 As many of you may have heard, I made the decision (and perhaps a questionable one) to attempt to ride Seattle to Portland for the first time in one day. I had never ridden a double century before but like others wanted to be part of the STP action we witness while volunteering. I made that decision in February. It was one that was filled with a bit of doubt. Last year, I was signed up and ready to ride in one day, but due to a random eye issue less than one week away was unable to attend. This year I kept thinking, “What happens if I get injured again?” But lo and behold, July 13 arrived – my ride was completed before the finish line closed (my goal), and fun was had! Below are key things I was reminded of throughout my 2019 STP training journey, even the day of:

Train even if you’d rather be indoors. Allergies pop up during the spring and summer months, so training seemed unappealing to me at times. Since April, I completed many rides with hay fever. I even thought I’d take June off if not for STP. I still think that. However, I’m glad I didn’t, as I relied on muscle memory during the big day.

Socialize the day before. I was glad I got to socialize with other riders. This eased pre-ride anxiety and was a great distraction, especially chatting with other STP newbies. Sarah and Chris from our club were also first-time, one-day riders. The more I talked about this ride, the more I found my energy built up. Riding with experienced riders (e.g., Scott Poindexter, “Scotty”) can be intimidating, so chatting with new riders was helpful. But remember to encourage others as well, and not just be a receiver of encouragement.

No such thing as a perfect ride. Some of us braved the Seattle traffic and lack of bike lanes on several streets and rode to pick up our packets the day before. We were ready to leave the Clubhouse when I noticed my eyewear was missing. After two searches, I gave up, admitted defeat, and purchased a cheap pair of glasses at a drug store. It was a bit discouraging as the new lenses turned out to be uncomfortable for longer distances and looked like ‘granny glasses’ (Scotty’s terminology). While it took some effort not to ruminate on the lost pair, I’m glad I decided to focus on the ride instead of playing the ‘What if…?’ game. Also, stopping at the Lost and Found at the finish line made me feel slightly better, as apparently eyewear is common to lose! 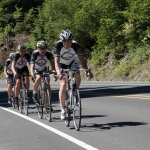 One thing I was reminded on the ride. Drafting is helpful, especially when tired! We all know the energy-saving advantages of drafting. However, I think for new (new-to-longer-distances) riders, it’s easy to forget to use this skill when tired. On Highway 30, with fatigue settling in, I saw many riders resigned to ride at a slower pace, allowing pacelines to pass them. I believe if they had been mindful and had tried to grab that last wheel, then some would have arrived before closing, if not sooner. During one stretch on Highway 30, Scotty and I were by ourselves when a paceline of about ten riders passed us. I figured, “What’s the worst that can happen (if paying attention)?” Not being a part of the paceline, which is already happening! I attempted to grab that last wheel and was glad, as it made the stretch to St. Helens livelier. It didn’t seem like a bad idea, as Scotty was thinking the same thing.

I don’t think it’s good to draft the whole way necessarily (it’s good to give back), but I do think drafting can allow one to move up a few miles easier, before deciding to relax and enjoy the ride on one’s own (or with one’s own group).

I’ll admit I was reminded of this by Scotty the day of. I was in a good paceline 60 miles in, and Scotty caught an even faster one, teasing, “See ya punk!” I learned my lesson, and luckily his pace slowed slightly down, so I didn’t have to sprint too much to catch up.

Note: Drafting requires a good deal of attention as one false move may impact the whole group.

One thing I’m still working on. Eating on long rides. It’s hard for me to feel hungry after a hard ride, and this is something I’m still struggling with from my centuries. It was hard for me to develop an appetite and force myself to eat (this was a bit of a slow process). With more experience, I’ll hopefully get this part down.

In conclusion, it was a great ride. The energy levels were fantastic, and it was not hard to feel pumped at 4:45 AM riding with the pack through the city. You have to trust that prior difficulties can work themselves out too. It was a huge relief for me to ride with others, as Scotty and I rode our last two centuries with long stretches by ourselves. In addition, after the first half, I realized that this was the first time since April that I didn’t feel stuffy/allergies on a long ride, and I had a big smile on my face. It was already a good day!