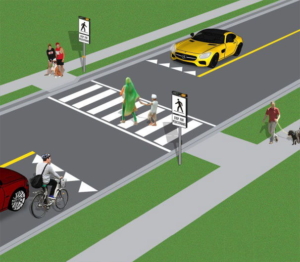 Crosswalks can be tricky.

Cyclists must use caution all the time, but intersections, even with crosswalks, demand extra attention. For example, if a vehicle is stopped at an intersection for no particular reason, ask yourself, “Did the driver stop for a crossing pedestrian?” Section 811.020 of the ORS (Oregon Revised Statutes) says that “Overtaking vehicles, including bicycles, must stop for vehicles stopped at crosswalks for pedestrians.” Failure to stop is a Class B Violation, punishable by a minimum fine of $130 and maximum of $1,000. The standard is $260. Just think of all the lattes you could have with that. You might even have had time to drink one if you hadn’t been talking to a cop.

Section 811.028 specifies that we gotta stop for pedestrians anyway, so we need to pay attention. A pedestrian asserts right-of-way by merely setting one foot (or the wheel of a bicycle) in the roadway. If a pedestrian starts to step into the street and we don’t yield, well, that too can cost a lotta lattes.  ✎

Another wrinkle (Pedal Power, p.126) is that bicyclists who cross a street from one sidewalk to the next must do so at NO MORE THAN WALKING SPEED. The theory here is that drivers are obligated to be aware of pedestrians approaching a crosswalk, but presumably pedestrians will be proceeding at walking speed. Drivers should not have to watch out for bicycles blasting through an intersection at 15 mph from a sidewalk. Incidentally, Thomas points out that it is not fair to single out bicycles for this treatment. Joggers, people on skateboards, etc., are not covered – just bicycles. It ain’t fair, but who says life is fair? So, the takeaway from this passage is that if you get hit in a crosswalk traveling at more than walking speed (usually considered to be 3 mph or less), well, it is your fault!

Citations are from Pedal Power, A Legal Guide for Bicyclists, Eighth Edition, by Ray Thomas. Mr. Thomas gives the legal citations in his book. If you do not own a copy of this little gem of a book, you should. It is available as a free download from https://www.tcnf.legal/, the website of the law firm of Thomas, Coon, Newton, and Frost.